the troubled diary of a David Bowie fan, day 5 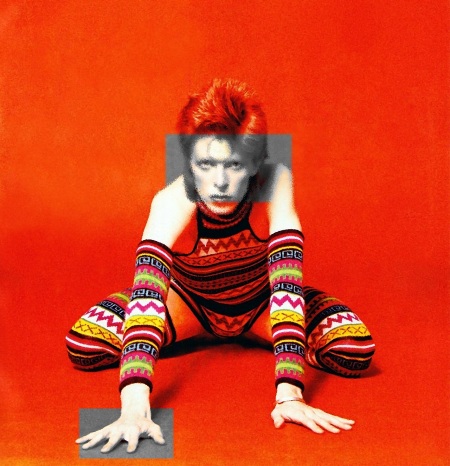 I know why people keep their headphones on when they are not listening to anything.

Degree of separation. Nothing says ‘Go away’ quite as well as the presumed knowledge the other person cannot hear you. Spent today composing two presentations about pop music for a job interview. Occupied my attention. I could not dwell on the fact I feel nothing, or that I am bored, or sad, or angry. Too busy. When you are in the zone, you are in the zone. Could have talked about Bowie in either presentation, quite legitimately. I did not. Seemed like to do so might be courting disaster.

Still dead. Apparently. After a day approximating what many folk call reality – i.e. I did some work – I guess I feel more accepting of the fact now. Surprised I could have doubted. I must be past stage one (SHOCK), unless I am still in DENIAL. “Back to life, back to reality” as Soul II Soul sang. That is the cruellest yet kindest cut of them all. Life goes on. Lemmy dies. Bowie dies. Rickman dies. Life goes on.

Listened to David Live (1974), and although I really enjoyed the shakiness of Rock’N’Roll Suicide I was also reminded of why I could never embrace David to my heart like others did, and do. That fucking guitar sound on Width Of A Circle and The Jean Genie! I mean, Christ. Do people actually enjoy such elongated public wankathons? Forget revisionist talk of androgynous awakenings in the early 1970s. Male, male, male. Which reminds me. I read something via Facebook that I really liked and empathised with.

It would be nice to report that he effected an epiphany in our young minds with his unabashed androgyny, his deliberate effeminacy, the way he put his arm over the shoulder of his guitarist on “Starman”. It would be nice to report that this sort of behaviour confounded the macho bully boys in 1970s English primary and secondary schools, but that wasn’t my experience. Somehow, it made him more über-male. After all, we were used to long-haired blokes; we had them on the wrestling every afternoon, blokes like Adrian Street; we had them running rings round defenders on Match Of The Day, blokes like Tony Currie, Charlie George and George Best. We didn’t really know what homosexuals were, with The Naked Civil Servant still round the corner in the mid-70s but we knew what puffs were and David Bowie wasn’t puff’s music. There was too much hard guitar, wham-bam percussion and fast, honky-tonk piano for that. Puff’s music was Donny Osmond. Your Granddad might think Bowie was some sort of nancy boy but he didn’t get it, did he?
A neo-Isherwood – David Stubbs on Bowie, Englishness and masculinity

My experience too. My experience. And another reason why I feel so confused, troubled now. He appealed to the lads. I cannot stress this enough. He was not one of us, not really. Too smart, too changeable, too magnificent. He appealed to the lads. He might well have appealed to other people as well, but it was not until Boys Keep Swinging came along that we really knew he was OK – the howls of outrage going up in living rooms across the UK as the lads threw empty beer cans into the firmament, seeing him dressed up all in drag like he might like it. Of course, it was theatre like before… but this theatre felt so much more real somehow. Not just songs to aspire to and drift across the stars with, playing pinball long into the night.

There is an Alexis Petridis eulogy to Bowie that I am terrified to read. I know it will show up my unworthiness.

I cannot bring myself to even look at the track-listing for Blackstar. It will show up my falsity.

Day five, and much as you want life to stop, it does not. It carries on.

This entry was posted on Friday, January 15th, 2016 at 9:50 pm and is filed under pop music. You can follow any responses to this entry through the RSS 2.0 feed. You can leave a response, or trackback from your own site.

3 Responses to the troubled diary of a David Bowie fan, day 5