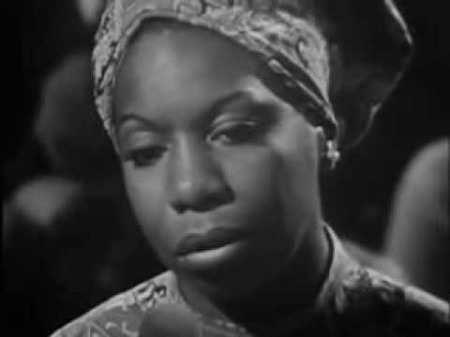 “Go on, cry cry, your tears won’t change a thing”.

I know surprisingly little about Nina Simone and her life when it comes down to it.

All that I need to know is contained within this one performance, recorded on 7 April 1968 three days after the death of Martin Luther King, Jr. and performed at the Westbury Music Fair. You don’t even need to listen to the music (although why you would choose not to listen to Nina Simone’s music I have no idea). Just watch her face, and the faces of her audience. Just watch her face, pain etched in every line – but not a victim, never a victim. Her stance as she hammers the keys. So proud, so caring. Just look at those eyes. The way she loses herself in the music. Just watch her considering how to start the song, the enormity of which she is unable to tackle but someone needs to.

Look at her face.

Listen to her voice. Listen to the instrumentation. Listen to it all, it all.  “Jazz is a white term to define black people. My music is black classical music.”

I don’t listen to this song to linger in shared pain and betrayal though. I listen to this song at the moments when the world feels too much to bear, when there’s a surfeit of that bullying misogynist asshole Donald Trump on the ‘web, when more innocent people have been murdered by Western-approved forces in Syria, when my seven-year-old is having difficulty adjusting to rules. I listen to this song for its succour, the balm. I reach deep inside this performance, for its frailties and hurt and beauty. I reach deep inside this performance and in the act of listening to this performance never fail to be healed in some way. The way it starts so gently and eloquently and sorrowfully, never in anger or retribution. The way it swells, the way Nina reaches for notes and expression that I have never heard from anyone. That soothing organ sound. The audience, still shocked beyond tears.

The way she grabs notes and feelings and emotion out of nowhere. The way the music almost overwhelms her voice. The way she stops the song, rolling to dissolution.

As she sings: “What do people…what do they think they have to gain? And did Martin Luther King, did he die in vain?”

Such an eulogy. It heals me every time. I could play this song five times over in its entirety – and have, often – and still never get tired of its healing balm, still find something new to lose myself within each time. It makes me want to punch the air, every refrain makes me want to punch the air and in the act of punching the air, stagger and weep and hug myself with happiness that someone out there knows how it feels to feel. I don’t do religion because I don’t need to do religion. This performance, this song, this singer is more than enough for me.

Nick Cave once drew a comparison with one of my own performances, telling Warren Ellis that I was “more entertaining than Nina Simone”. He could not have paid me a higher and more loaded compliment if he had thought about it for five lifetimes. And if I write that “it sometimes feels like Beyoncé is determined to pick up the mantles of both Prince and Nina Simone”, I do not rush to form that sentence.

Nina, I love you so much.

Kevin Rowland [talking about Searching For The Young Soul Rebels]: “I want to ask you a question. You know you said you can think of only a few albums that have been so succinct and as complete as that, which ones? An entity.”
Huggy Bear. A couple of Nina Simone albums. Obvious stuff like Marvin Gaye…

This entry was posted on Sunday, October 16th, 2016 at 9:51 pm and is filed under Music criticism. You can follow any responses to this entry through the RSS 2.0 feed. You can leave a response, or trackback from your own site.

2 Responses to The greatest performance