This is the final issue of Careless Talk Costs Lives.

Don’t mourn for us. We set out what we intended to do. Exist for 12 issues, and stop. Prove that it’s possible to put together a great magazine with few resources, aside from those of enthusiasm and talent and a passion for music. Cover The Music We Love in a manner that we felt was befitting – words unhampered by thoughts of shifting units, photography that never once resorted to cheap gimmickry, illustrations that burned with a desire to communicate. Our design’s clear and bold, rooted in the overwhelming belief that we are proud of our words and photography and illustrations, that we don’t need or desire to hide them behind “sexy” layouts and lurid headlines. No press photos. No ring tone adverts. No full stand displays in WH Smiths. No consideration for content beyond featuring we’re listening to, and moved by, at the time.

So we didn’t bring down the UK music press. In the interim, NME and Q have dumbed themselves down even further, Mojo has gone populist, The Wire continues to exist in magnificent isolation… and God knows alone what X-Ray and Bang think they’re doing. They’re certainly not entertaining. (We much prefer the outsiders, anyway – Punk Planet, BB Gun, Comes With A Smile, diskant.net, artrocker.co.uk, tangents.co.uk, trakmarx.com and co.)

Don’t mourn for us. We intended to finish here. Both myself and Steve have future magazines planned – Steve intends to go even more stylish, soulful, larger size, higher print quality, more photographs with Loose Lips Sink Ships, first issue out in February, edited by Stevie Chick. Eugene from Oxbow writes about wrestling. Grasshopper from Mercury Rev talks about…

Myself? I’m going wordier with Plan B: more bands, more copy, more arguments. Hopefully out the same time. The two magazines will continue to share a common vision and ideal and love for music (and contributors): the principle that you should take pride in everything you do.

A few months ago, I was asked for my motivation in continuing to edit Careless Talk. This is what I replied: “Music. Validation. Communication. To try and counter the hegemony that exists, to try and counter the mediocrity and media consensus that exists. I want to try and convert as many readers as possible to the idea of seeking out avenues for themselves. Sometimes it helps to stop the roaring silence in my head. It feels good to work on something I feel proud of, to be part of history. It’s always bothered me the way great music is passed over by the press because it’s easier to follow a set order: far easier to work through conventional channels (large publishers, press agents, trips abroad, established tour support slots) then seek out fresh channels. I guess that as a critic, I’ve always been a tastemaker, not a commentator or journalist – and if I can’t behave as the former than I feel unfulfilled as the latter. It seems blindingly obvious how to create a great magazine: believe in what you’re doing, take a real pride in your work and strive for greatness – of, if not greatness, individuality.

“If I’m being honest, after a while the very act of doing something becomes the motivation for doing something in itself (ie: routine is a force stronger than almost anything in life) and I almost don’t think about why I give so much time and commitment to CTCL. It’s partly because I have little to divert myself from this magazine. I note that I haven’t mentioned once the idea of making money from this: that’s cos it’s horrible to think this magazine might be a failure in that respect.

“Motivation changes. Initially, it was the idea we could make money from doing something we (the Careless Talk team) love and believe in. Eighteen months down the line? That clearly isn’t the motivation anymore: that’s why I refer to the very act, the very process of creating each issue and chasing up e-mails and interviewing artists and proof-reading and receiving Steve’s photographs and Andrew’s designs as a motivation in itself. It hurts to be idle. No one’s offered me any money for being the best at my craft, my art, so I continue anyway.”

Cheers for listening in. 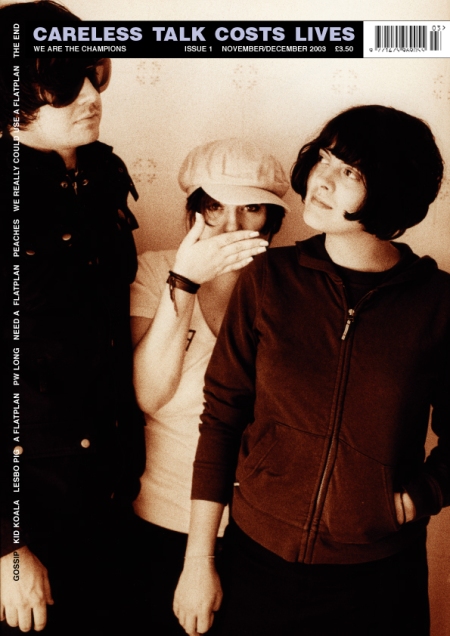 This entry was posted on Tuesday, November 1st, 2016 at 11:17 pm and is filed under Music criticism. You can follow any responses to this entry through the RSS 2.0 feed. You can leave a response, or trackback from your own site.