No Monster Club. Where Did You Get That Milkshake? In words. And a bit of postmodernism. 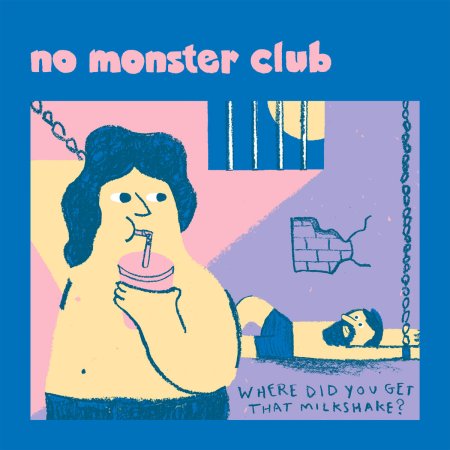 The first song reminds me of the Tronics, and its title references The B-52s. So does its sound, now I think on it. In a distorto, male way.

The second song reminds me of a Loch (up in Scotland, duh) and the glorious good time I used to have catching buses with the Desperadoes and the Pastels, and its title references a cool garage U.S. underground label. So does its sound, not I think on it. In a playful, male way.

“Interpretation is the revenge of the intellectual upon art” (Susan Sontag)

The third song bounces in a way I haven’t for too long, and its title makes me think of one late night in Brisbane when [resorts to blank expression]. It so is not Australian punk it makes me hurt. It is upbeat and lovely and yes bouncy, the way no one person is.

“To try to write love is to confront the muck of language: that region of hysteria where language is both too much and too little, excessive and impoverished” (Roland Barthes)

The fourth… ah, just listen to the damn band why don’t you?

“To pretend, I actually do the thing: I have therefore only pretended to pretend” (Jacques Derrida)

Unfettered, unafraid, purely wonderful (pure and wonderful). Rampant, in its own sweet way. So right that the song after this on my iTunes is ‘She Loves You’ (The Beatles).

This entry was posted on Sunday, March 12th, 2017 at 10:16 pm and is filed under Music criticism. You can follow any responses to this entry through the RSS 2.0 feed. You can leave a response, or trackback from your own site.