The magic begins, close to home | a review of Day 2 ‘At the Edge of the Sea’ (Cinerama, Popguns, Helen McCookerybook and so forth) 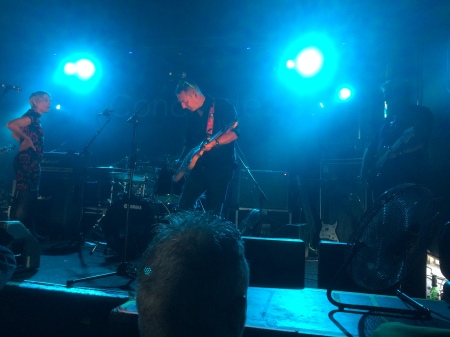 Thursday was not good.

Thursday, well maybe we should not talk about Thursday.

The magic begins, close to home. 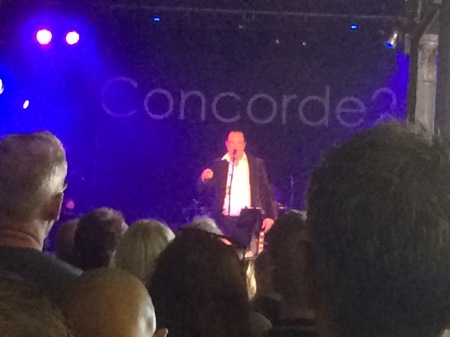 I watch Cinerama play live, early. It strikes me that during the 1980s singer David Gedge got compared to The Smiths, but seriously now. You cannot imagine Morrissey reading out the rules to the fan raffle in between songs (unless he was being deliberately arch), nor laboriously detailing all the other acts playing during the day, nor indeed going on stage so early to help ensure a decent crowd for all the other acts playing during the day. I am in two minds whether this is good: long, I have thought that Mr Gedge undersells himself and this is to his detriment. It is also his charm, and Cinerama are a charming band, what with the female vocals and keyboard and languid sighs of affection masquerading as songs. I cannot but help think Cinerama would be playing Meltdown and the songs of Scott Walker and all that other stuff those fancy London names do (Neil and Jarvis and Richard) but Mr Gedge is too deprecating.  Still. You expect me to think this a plus, ultimately – and you would be right, ultimately. But. The crowd is subdued (old) but they warm up (not that old). No one cheers when the support bands are mentioned but mayhap the crowd thinks it to be bad form (disrespectful) in front of the Man of the Day. I do not think the Man of the Day would have minded.

(I miss Day 1. Membranes + The Wedding Present paying George Best. Is it not enough for you that I have made it out to my second show of the year?)

I sit outside and chat with my friend Helen for a while. Noisy bands play at being noisy inside: some with interesting sounds and shaven heads and the same male vocals as before, and some a little bit more rickety and ramshackle. This is all to the good but this is not my community. The magic continues nonetheless.

(Actually, I am wondering about this. This pronouncement of magic. I refer to it as ‘magic’ because it has a similar effect on me and on my dark moods as Thursday and Lorde, Thursday and ELO – but I do wonder that it is only when I identify the effect as ‘magic’ that it becomes magic – i.e the act of naming is what creates the effect. So until I typed in these words the magic did not exist. Is the naming so important? I would like to think so.) 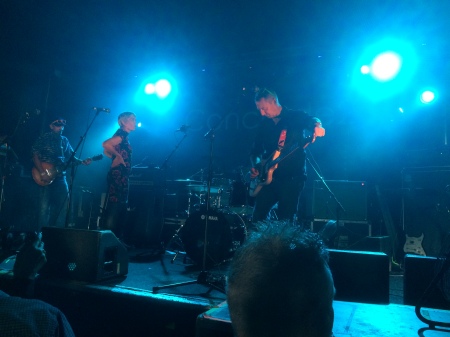 So, The Popguns. I don’t miss just not going to shows, or chatting to friends (although I do miss both, terribly). I miss going to shows, dancing at shows, hearing bum notes on the bass and guitars cutting out on stage just during the climactic solo, and breathing in the cigarette fumes of friends chatting outside during the show. I miss punching the air and dancing on one leg (waving the other where no one can see it) and then dancing on the other and semi-pogoing when the guitar cuts out, and singing lustily along to lyrics I never learned in the first place, and feeling that yes this – with all the BO smells and unrecognised faces and coaches passing by outside the Concorde 2 – this is home. I miss my community. I miss the sense of belonging.

I have written much (and eloquently) about The Popguns over the years. For example:

I loved this band. They soundtracked my drunken despair, infatuation buoyed by delusion and brought down by the thought that however bad you feel now, tomorrow’s worse.

The Popguns obviously grew up on The Smiths. But their music was always a little too desperate to connect with all the cute indie kids out there. It wasn’t polite at all. (In terms of temperance, it was fucking heavy metal.) You could taste the bitter sea air of all those lonely walks home at 3am. Wendy had a real edge to her voice, the guitars were almost frantic in their determination to prove they amounted to less than the sum of their influences. It’s probably no coincidence I first encountered The Popguns around the time I moved to Brighton: after years of searching I had a place I could call home, with all the bitter aftertastes that involved. Nothing special to anyone who came from outside perhaps, but they were to me.

So frantic. So futile. Their guitarists masked it all under a welter of jangle. They thought they were Sonic Youth or someone. (They weren’t. They really weren’t.) That self-delusion was one of the reasons I loved them so. The messiness of their music (when it could all have been so straightforward) so reflected the messiness of my life (when it all could have been so straightforward). They tried so hard. They could’ve been The School, easy. (If they’d been Australian, they would have been Even As We Speak or someone.) Wendy’s voice was so plaintive, so pleading. She always seemed rather embarrassed by my fanboy love for her band, perhaps reading into it something more sinister. I can’t say I blame her.

Nostalgia caught up with knowledge of a time when I really wasn’t somebody despite loads of people thinking I was.

I have waited long, lonely years to see them play live again – and they do not disappoint. They play my favourite song of 2014, ‘Lovejunky’. They play my second favourite song of 2014, ‘If You Ever Change Your Mind’, or if they don’t I imagine they do and that is just as good. They don’t play ‘Waiting For The Winter’ or maybe they do and I’m getting too distracted (by the sound of Popguns in my ears as I type these words). Wendy’s voice swells and ebbs and swells once more until it fills the rushing spaces and gaping silences, until it blots out everything that threatens to topple me downwards, it swells and swells until it becomes the ONLY sound in the world. As I knew it would. And Pat and Greg are laughing and smiling and doing what they need to, and Simon is earnest and committed, and… 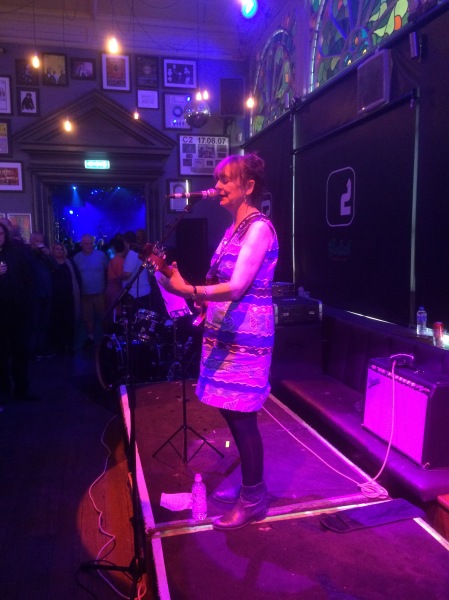 She plays ‘Heaven Avenue’ and it is pure magic.

She plays ‘The Sea’ and everyone sings along despite not knowing the song seconds before and it is pure, sad magic.

She plays the old Chefs song ‘Let’s Make Up’ and it sounds like a phalanx of angels are playing her guitar.

She makes the magic happen. Not my words, not my naming of the event, just Helen.

She jangles and plucks with a Rickenbacker that makes all the boys on Facebook drool, and hits a string that sounds like a chorus-line of imps deeply chuckling. She plays the plaintive, heroic ‘Heaven Avenue’ and it’s more than I can do not to sob. Emotions overwhelm me and I fucking wish they wouldn’t and I desperately hope she doesn’t mention me from on stage because I want to remain invisible in this land under my Stranger beanie. She jokes and smiles and does that whole thing where she is clearly enjoying playing music so much that she cannot hold back the laughter.  I mourn friends I can no longer remember the names, faces or stories of.  I mourn wind smells, shapes the smoke used to make above Chelmsford in the early morning. I want to feel dew between my toes. I can hear harpsichords. (The importance of being Helen.)

This entry was posted on Saturday, August 19th, 2017 at 9:52 pm and is filed under Music criticism. You can follow any responses to this entry through the RSS 2.0 feed. You can leave a response, or trackback from your own site.

4 Responses to The magic begins, close to home | a review of Day 2 ‘At the Edge of the Sea’ (Cinerama, Popguns, Helen McCookerybook and so forth)