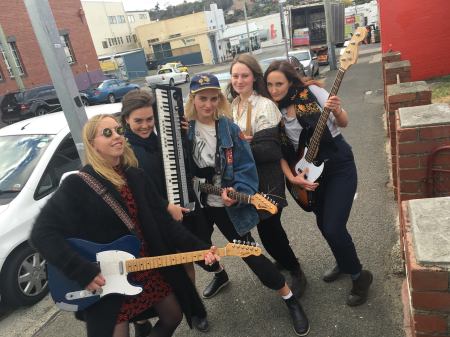 First thing you need to know is that there are a surprising number of bands called Foxy Morons or Foxymorons, or theatrical acts.

Second thing you need to know is that if they’re all as good as this latest batch from Hobart, Tasmania then you should be getting on the blower straight away to Rough Trade or Cherry Red or someone like that and suggesting a concept album. These Foxy Morons sound like they’re having a good time, but in a downbeat way. They sound like they understand the point of harmonies, of taking it easy, not rushing or stressing to find the right note. If it comes, it comes – and if it doesn’t….? Some of us are old enough to still recall the day Teenage Fanclub lost just a soupcon of magic, the day they stopped having to make three attempts to start every song (see also, Orange Juice). Not that I’m trying to imply that the charm of Hobart’s Foxy Morons lies in their ramshackle amateurism (although doubtless that is part of it). They understand the necessity of reaching that other place altogether. Chug along bravely until they decide it’s time to break the shackles once more.

There are six songs on the new Bandcamp album and… man. Man, oh man. I’m thinking my old American sweethearts Burnt Palms but as I have shamefully not renewed my acquaintance with them for many a long month now I have a feeling I’m as out as out can be. Not slick, you understand – but plaintive in a sort of way that sort of kind of vaguely maybe not sure yet let me think about it reminds me of Courtney Barnett on the song ‘Ex’. You know Ms Barnett, I’m sure.

Out as out can be.

A balm. A calm. A Panacea, but without the capital ‘p’. An oasis of… I was going to write “beauty” but then started slapping myself figuratively around the figurative past-faced face for resorting to such cliche. SLAP! SLAP! Damn fool critic. OW! QUIT IT! ‘Mainland’ rocks the way most mainlands don’t. ‘Ciggies’ rocks in a mournful and sympathetic way, the way most mammals don’t (and just the opening handful of chords make me think of The Cannanes, early Cannanes, in a most non-stressful way). Better than three convoy-loads of ‘better than’.

The way it works is thus:  I wrote some words on Foxy Morons. Cos they rock. And that’s the way I like to do things. Write words about bands that rock. Ignore the ones that don’t. Mostly works out. I guess. Foxy Morons rock. You know that without hearing ’em cos I’ve written about ’em…but wait. If you don’t hear them…well. Man. Then you’re missing out big time.

Beautiful keyboard, and understanding of pace. Of course they save the best song for last.

You know what? If we ever move back to Australia I am gonna push real hard for Hobart.

This entry was posted on Friday, March 3rd, 2017 at 10:25 pm and is filed under Music criticism. You can follow any responses to this entry through the RSS 2.0 feed. You can leave a response, or trackback from your own site.