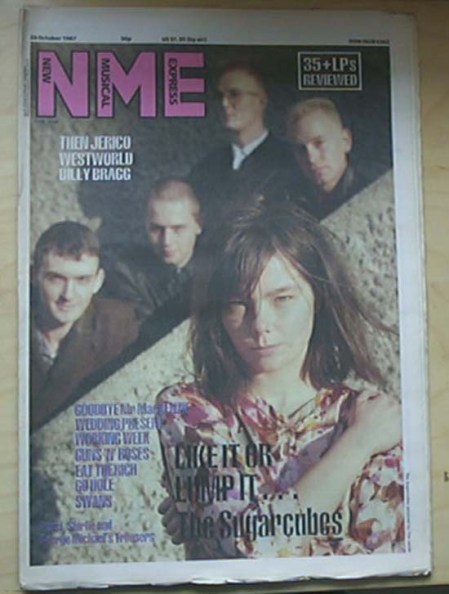 Einar came to visit us, when we were at some other show in Newcastle. I can’t remember why now, perhaps the Sugarcubes show had been cancelled, but my friends Ian and Nikki from Olympia were there, and Melanie; and he spoke loudly and volubly for ages, trying to wind everyone up, playing the record industry game, when all we were doing was hanging out and wanting to maybe dance a little. Not Björk. She was too Willie Nelson (Stardust) even then, and that would have been incredible. Perhaps he was angry still – or pissed off but trying not to show it – because a few weeks or months earlier I had totally stuffed up my Sugarcubes NME cover interview story – everyone else was flown to Iceland but not me, I just got asked to hang out at some video recording session or similar, and talked to them for hours, so nervous at the prospect of such exposure, hours. Nonsense, I am sure. I never knew what to speak about, but I was starstruck by Björk, she was so beautiful, so smart, so radiant. So starstruck, the interview tape never came out (a common enough problem for me, those years) and we had to go meet for another few hours, the band a little less welcoming and a little more surly this time, me babbling doubtless. I never did manage to do ‘cool’ very well, which was what they expected I think, from an NME writer… and was why I got along so well with Mudhoney and sorts in Seattle, because they never did ‘cool’ that well either, just an ability to see through bullshit (which was something Einar never managed, for one). So the interview appeared, but what with the redone interview and my nerves, I only had a day or so to write it and frankly the NME would have printed any old rubbish, which they did. The actual article started off with a vivid dream I’d had the night before, badly retold. As a device, it was cringe-inducing. Didn’t get on to the band interview until 800 words in, and then they had to run it over onto the back pages.  Awful. Tim Jonze did the photo, I believe. Could be wrong. Always tried to expunge this episode from my mind, but it was possibly one of the main reasons Melody Maker offered me a writing gig a few months later – it was mentioned in my interview. Song still sounds as magical, as mysterious and mind-melting as it did all those years ago: haunting and beautiful and of course sexy. Heard it today, when I sold the third of my ‘Birthday’ 12-inchers on Discogs, made me briefly nostalgic for… what? My life as a dog.

Muffled. To this day, I have never viewed the video again.

Or spoken to Einar.

This entry was posted on Friday, May 5th, 2017 at 9:30 pm and is filed under pop music. You can follow any responses to this entry through the RSS 2.0 feed. You can leave a response, or trackback from your own site.