Song of the day (the old and the new) – 11. Little Mix and Mecca Normal

I like ‘Blurred Lines’, although I can do without the rapey connotations. There is a song on the new Little Mix album that threatens to become annoying but right now amuses me greatly because it is such an obvious…um…tribute to ‘Blurred Lines’ but without the rapey connotations. So, duh. I like it. I am not so sure about Little Mix though. I saw them presenting a Christmas special on television and they struck me as irritating and not in a cute way. Just hard, cold. In it for the money not the cultural capital. And before you say “well isn’t that pop music in a nutshell” well no, it isn’t is it? Also, I just did a quick Google on Little Mix to see what they looked like and the top result is “Little Mix star Leigh-Anne Pinnock bares her bum in a blue bikini on a speedboat after sharing saucy topless snap”.

I suspect that if I throw that into my SEO as a phrase, hits on this blog will go through the roof.

Their new album Glory Days is ace though, in a way the new Katy Perry most definitely is not. Hits all the right buttons, fizzes with the correct amount of fizz, reminiscent of much else, slips down very easy and helps block out the sound (if not the heat or smells) of the 10.52 from Redhill to Guildford. Also, the concept behind ‘Shout Out To My Ex’ is strong if not quite nasty enough. It turns me into a partly passive consumer but I have never seen this as a minus, to subject myself to the all-consuming glare and high-heeled stomp of pop music. ‘F.U.’ is fun in the way Lily Allen once was. ‘You Gotta Not’ is so blatant it removes my breath briefly. And so on.

And for balance, we have this.

I am just trying to point out the obvious. I am unable to listen to the first without the balance of the second, do not want to listen to the second without the balance of the first. The two are not linked, have never been linked, will probably never be linked again except in the mind of Everett True (who does not exist). I love the passion, the intent of Mecca Normal. The searing literacy. The relentless beauty. The admittance that most all relationships are always power struggles, especially when you least expect it. Crudely, three of my favourite artists remind me of Mecca Normal (not the other way round). That’s a recommendation in itself. The dialogue present in every Mecca Normal song I have heard is worth experiencing again and again. It does not infantilise the listener, much as the listener may want to be infantalised. It does not cause the listener to cast aside the class struggle that is central to day-to-day life, whether individuals are aware of it or not. 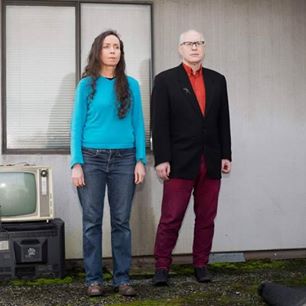 Opinions are like assholes. Everyone’s got one. Except for Donald Trump. He’s got two.

This entry was posted on Thursday, July 6th, 2017 at 9:20 pm and is filed under pop music, song of the day. You can follow any responses to this entry through the RSS 2.0 feed. You can leave a response, or trackback from your own site.

2 Responses to Song of the day (the old and the new) – 11. Little Mix and Mecca Normal